The Environmental Working Group(EWG) recently announced a study about how meat affects our health as well as the environment. Some of you may have heard of it but the truth is very shocking. So, I would like to share their findings in this newsletter.

We’ve seen many burger joints popping up in NYC. I totally believe Americans are true burger lovers.  According to EWG, “Americans consume 60 per cent more than Europeans (FAO 2009) and the global appetite for meat is exploding. From 1971 to 2010, worldwide production of meat tripled to around 600 billion pounds while global population grew by just 81 percent (US Census Bureau, International Data Base). At this rate, production will double by 2050 to approximately 1.2 trillion pounds of meat per year, requiring more water, land, fuel, pesticides and fertilizer and causing significant damage to the planet and global health (Elam 2006).” As you know, the former president, Bill Clinton is famous for being burger lover and sure enough he had to go through bypass surgery. He is now on a plant-based diet. He understands that what we eat affects our health. It is well-known how our mass produced meat affects our health (antibiotics, growth hormone, and toxins in the meat cause heart disease, cancer and other diseases).  But additionally, those mass produced meats are causing massive environmental damage. So what EWG found was…

The chart EWG made below shows the lifecycle total of greenhouse gas emissions for common protein foods and vegetables, expressed as kilograms (kg) of carbon dioxide equivalents (CO2e) per kg of consumed product. 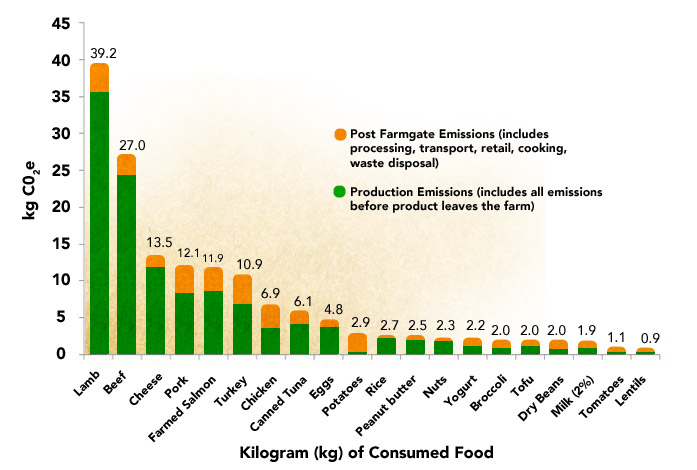 Lamb, beef and cheese have the highest emissions. This is true, in part, because they come from ruminant animals that constantly generate methane through their digestive process, called enteric fermentation. Methane (CH4) – a greenhouse gas 25 times more (CH4) potent than carbon dioxide (CO2), accounts for nearly half the emissions generated in this study’s Nebraska beef production model (see chart below). Pound for pound, ruminants also require significantly more energy-intensive feed and generate more manure than pork or chicken (see figure 2).

Feed production. Most U.S. livestock are fattened on fishmeal, corn, soybean meal and other grains. Grain production, in particular, requires significant quantities of fertilizer, fuel, pesticides, water and land. It takes 149 million acres of cropland, 76 million kilos (167 million lbs) of pesticides and 7.7 billion kilos (17 billion lbs) of nitrogen fertilizer to grow this feed. Fertilizer applied to soil generates nitrous oxide (N20), which has 300 times the warming effect of carbon dioxide. Irrigation pumps, tractors and other farm equipment also release carbon dioxide, but in relatively small amounts. Pesticides and fertilizers often end up in runoff that pollutes rivers, groundwater and oceans. Feed crops are heavily subsidized by taxpayers through the federal Farm Bill, to the tune of $45 billion over the past 10 years. Fertilizer and pesticide production requires a significant amount of energy, but our model found that together they account for just 12 percent of the emissions from growing feed. The biggest impact is from the nitrous oxide emissions resulting from fertilizer application.

Manure: Animal waste releases nitrous dioxide and methane and pollutes our water and air, especially when it is concentrated. In 2007, U.S. livestock in confined feeding operations generated about 500 million tons of manure a year, three times the amount of human waste produced by the entire U.S. population (EPA 2007). Manure is the fastest growing major source of methane, up 60 percent from 1990 to 2008 (EPA 2010) . While manure is a valuable nutrient for plants, it can leach pollutants – including nitrogen, phosphorus, antibiotics and metals – into groundwater when storage facilities leak or too much is spread on farm fields. More than 34,000 miles of rivers and 216,000 acres of lakes and reservoirs in the U.S. have been degraded by waste from confined feeding operations (EPA 2009). Decomposing waste releases dust, smog odors and toxic gases, including ammonia and hydrogen sulfide, which degrade air quality and can cause itching, dizziness and discomfort to workers and nearby residents.

Wasted Food is a Major Source of Emissions

EWG’s analysis found that discarded food accounts at least 20 percent on average of the emissions associated with producing, processing, transporting and consuming meat and dairy products. Reducing waste and buying only as much as you can eat is the easiest way to reduce greenhouse gas and other environmental impacts of food.

Most of the emissions attributed to waste come from producing food that is ultimately discarded – from fertilizer and pesticide production, growing feed, transportation, etc. Foods with higher waste rates such as farmed salmon (44 percent is thrown away by retailers and consumers) have much higher emissions during production since it takes a lot more salmon to produce the amount that is actually consumed. Some of the waste-related production emissions are unavoidable, such as moisture and fat loss during cooking. These must be accounted for in the lifecycle analysis, but there is very little consumers can do to minimize these losses. (See Figure 5.) 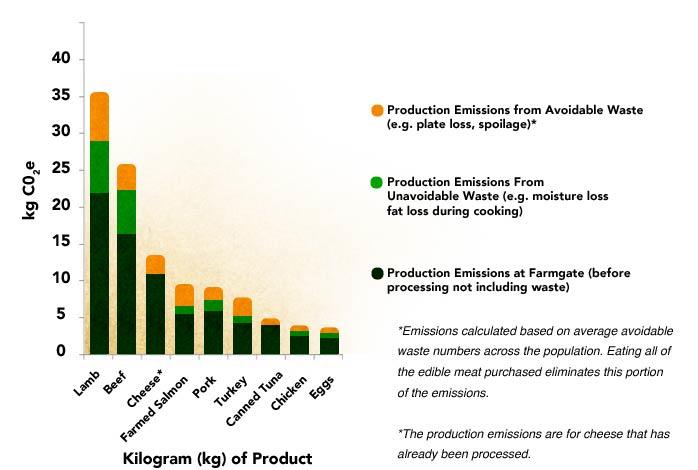 Here’s how eating less meat measures up against other climate-saving actions:

If you eat one less burger a week, it’s like taking your car off the road for 320 miles or line-drying your clothes half the time. 10

If your four-person family skips meat and cheese one day a week, it’s like taking your car off the road for five weeks – or reducing everyone’s daily showers by 3 minutes. 11

If your four-person family skips steak once a week, it’s like taking your car off the road for nearly three months. 12

If everyone in the U.S. ate no meat or cheese just one day a week, it would be like not driving 91 billion miles – or taking 7.6 million cars off the road. 13

Why Go Organic, Grass-Fed and Pasture-Raised?

A considerable number of studies show that grass-fed beef has less fat and more nutrients than far more common and less expensive grain-fed beef (Duckett 1993, 2009; Rule 2002; UCS 2006). A 2009 study comparing both types found that grass-fed beef had lower total saturated and mono-unsaturated fat, more heart healthy omega-3 fatty acids, a lower (and healthier) ratio of omega-6 to omega-3 fatty acids, and higher levels of vitamin E, beta-carotene and B-vitamins (Duckett 2009). Choosing certified organic and/or grass-fed products reduces your exposure to traces of sub-therapeutic antibiotics and artificial hormones that are given to conventionally raised animals. Going organic also reduces exposure to toxins from pesticides that might accumulate in animal fat.

“Exposure to antibiotics, growth hormones, and toxic run-off from livestock feed lots can be minimized by eating free-range meat raised without these medications if it is available.”

Food from free-range, pasture-raised animals may also reduce the risk of bacterial contamination. A 2007 study found that the prevalence of fecal salmonella in open-pasture chicken farms was about half that of conventional farms (16 percent versus 30 percent) (Siemon 2007). Other studies have found that grass-fed cattle carry less E. coli overall than grain-fed, confined animals (Russell 2000, Bailey 2003). Organically raised meat may also be safer. A recent USDA-funded study found that salmonella prevalence in fecal samples from organic poultry farms was significantly lower than in samples from conventional farms (6 percent versus 39 percent). Similarly, only 5 percent of organic feed samples were contaminated with salmonella, versus 28 percent of conventional feed samples (Alal 2010).

Well-managed grazing and grass-fed operations are better for the environment. They use fewer energy-intensive inputs and, by regularly moving animals to fresh pasture and keeping them away from streambeds, they spread the manure more evenly and improve the quality and quantity of forage growth. This helps to conserve soil, reduce erosion and water pollution, increase carbon sequestration and preserve biodiversity and wildlife (Johnson 2002, FAO 2009, Pelletier 2010). Organic feed production and grazing practices are also better for the environment. They reduce fertilizer and pesticide runoff into waterways, and the use of compost, cover-cropping and rotational grazing helps build healthy, productive and water-conserving soils. Organic methods also enhance pest and weed resistance without the use of chemicals and ultimately foster greater resiliency in the face of extreme weather and climate change.

These higher emissions may be offset, however, by the carbon sequestration benefits that well-managed pasture systems can provide (Pelletier 2010). Rotational grazing and the application of organic soil treatments can have a significant impact on building up soil carbon in pastureland (Follet 2001, Conant 2001). Far fewer energy-intensive inputs are used in grass-fed beef production.

The climate impact of grass-fed animals depends on factors that vary greatly from one production system to another. They include: average weight gain and quality of forage (the slower the animals gain weight, the more methane they emit); the rate of soil carbon sequestration; and crowding (greater density of animals means more concentrated manure deposits and higher methane and nitrous oxide emissions).

Much more research is needed to determine the comparative climate impact of pasture-based versus confined feedlot systems.

Eating Less, Greener and Healthier Meat is Good for Your Health and the Planet

Climate impacts are just one factor in choosing what to eat. There are many compelling health, environmental and animal-welfare reasons to eat less meat and to opt for meat from organic, pasture-raised, grass-fed animals. It may cost more, but when you buy less meat overall you can afford healthier, greener meat.

Eating and wasting less meat (especially red meat) and cheese can simultaneously improve our health and reduce the climate and environmental impact of food. Choosing grass-fed, free-range, pasture-raised and/or organic products also helps to expand market demand. As the market grows, more farmers and ranchers will choose more sustainable and humane production methods, which in turn will make these products more affordable and available.

Choosing healthier, greener food is important, but significantly cutting the greenhouse gas emissions that contribute to climate change will also require governmental action. We all need to get engaged to push for comprehensive public policies that put the nation on a path to greener energy. Reducing meat production’s negative impacts on soil, air and water will take stronger regulatory enforcement and better policies – in addition to significant changes in meat consumption habits.